A new authorized collection of little-known Pons stories by August Derleth, including the author's only Sherlock Holmes story. Restored by David Marcum. 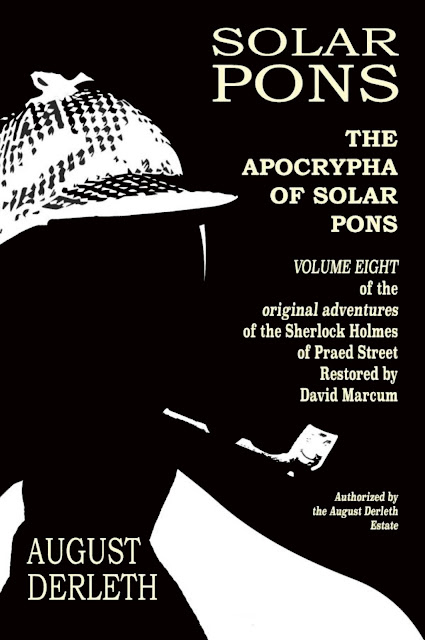 From the late 1920’s until his too-early death in 1971 at age 62, August Derleth lived, to greater or lesser degrees, in The World of Solar Pons. Already an admirer of Sherlock Holmes when he was a Wisconsin college student, Derleth wrote to Sir Arthur Conan Doyle, asking if there would be any more Holmes adventures. Upon receiving a negative response, he set about creating some of his own – but set in (then) contemporary times of the 1920’s. Having never been to England – and in fact, he never made it there during his entire life – he relied on travel books and commentaries to fashion a very believable representation. In these stories, Solar Pons made use of the classic methods of Sherlock Holmes.

After his death, a posthumous collection of Pons stories, The Chronicles, was published in 1973, and it was believed for many years that these were the final Pons adventures. But others began to turn up, including a number that were found in Derleth’s papers – some having been written when he was in his twenties and the subsequently filed and forgotten.

Now, thanks to Derleth’s heirs and the August Derleth Estate, which still retains full ownership of Solar Pons and these apocryphal adventures, this new easily available and affordable collection of these “lost” tales has been made possible. In addition to adventures such as “The Burlstone Horror” and “The Muttering Man”, there are all four of the “Off-Trail” Pons adventures that Derleth co-authored with Mack Reynolds, the complete compiled entries “From the Notebooks of Dr. Lyndon Parker”, Derleth’s rare companion volume A Praed Street Dossier (1968), and Derleth’s only Sherlock Holmes story, “The Circular Room” (later rewritten as a Pons tale!)

Join us one more time at 7B Praed Street, where again The Game is Afoot!