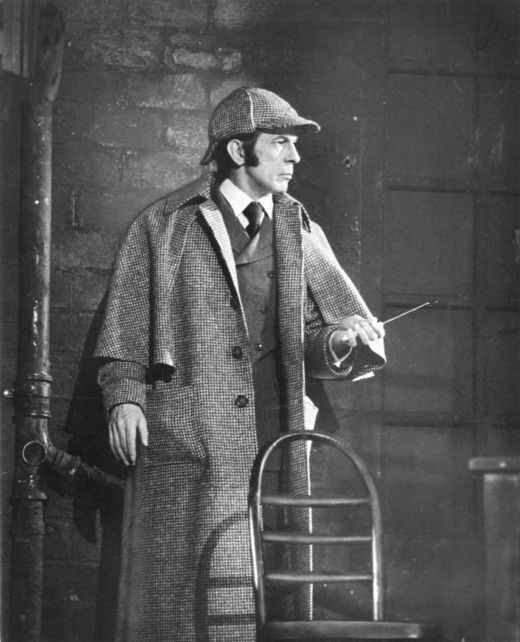 Leonard Nimoy in a 1975-6 revival of William Gillette's play, Sherlock Holmes.
Posted by John Cox at 10:52 AM 2 comments:

Anthony Horowitz's first official Sherlock Holmes novel was released with great fanfare in 2011. In my opinion, it's a contender for the best Holmes pastiche of them all. Horowitz went on to pen a second novel about Holmes' nemesis Moriarty. 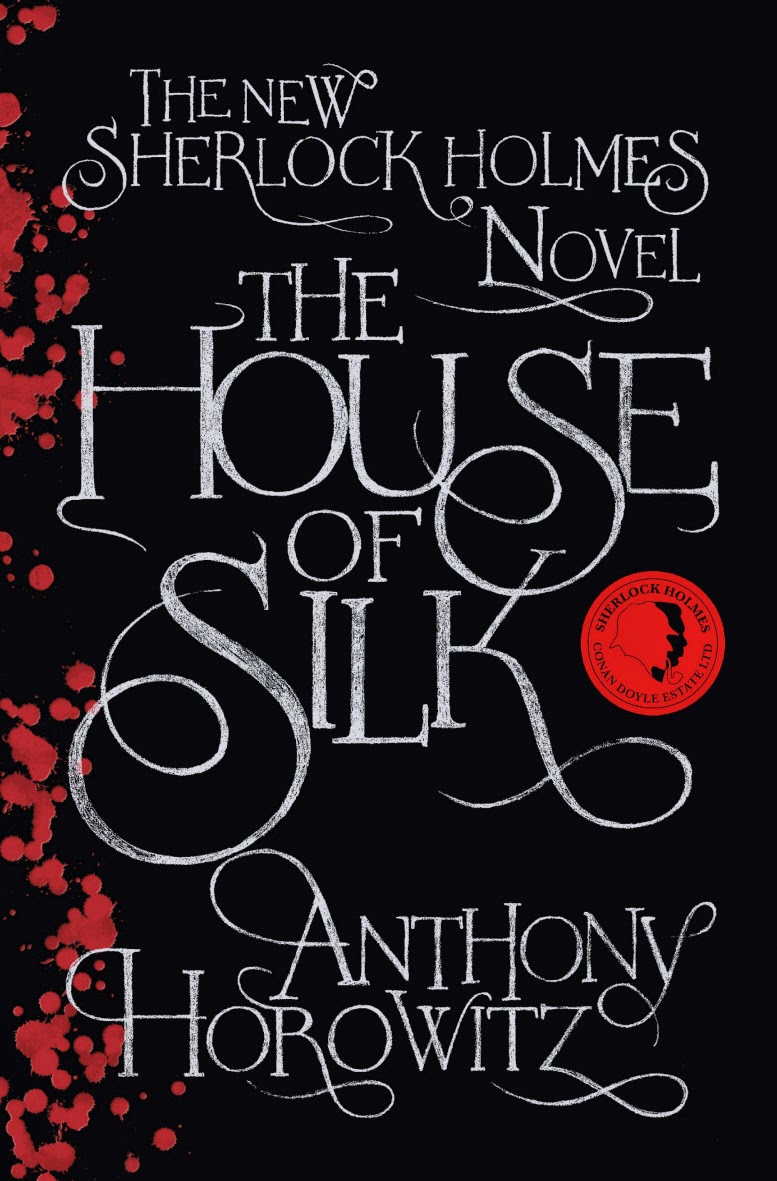 It is November 1890 and London is gripped by a merciless winter. Sherlock Holmes and Dr Watson are enjoying tea by the fire when an agitated gentleman arrives unannounced at 221b Baker Street. He begs Holmes for help, telling the unnerving story of a scar-faced man with piercing eyes who has stalked him in recent weeks.

Intrigued by the man's tale, Holmes and Watson find themselves swiftly drawn into a series of puzzling and sinister events, stretching from the gas-lit streets of London to the teeming criminal underworld of Boston. As the pair delve deeper into the case, they stumble across a whispered phrase 'the House of Silk': a mysterious entity and foe more deadly than any Holmes has encountered, and a conspiracy that threatens to tear apart the very fabric of society itself...

With devilish plotting and excellent characterisation, bestselling author Anthony Horowitz delivers a first-rate Sherlock Holmes mystery for a modern readership whilst remaining utterly true to the spirit of the original Conan Doyle books. Sherlock Holmes is back with all the nuance, pace and powers of deduction that make him the world's greatest and most celebrated detective.

The "Young Sherlock Holmes" concept was revived in 2010 with a new series of YA novels penned by Andrew Lane and officially sanctioned by the Conan Doyle Estate. The title of Lane's first book was to have been, The Colossal Schemes of Baron Maupertuis, a nice tie-in with Conan Doyle and the canon. However, the book was ultimately called Death Cloud. 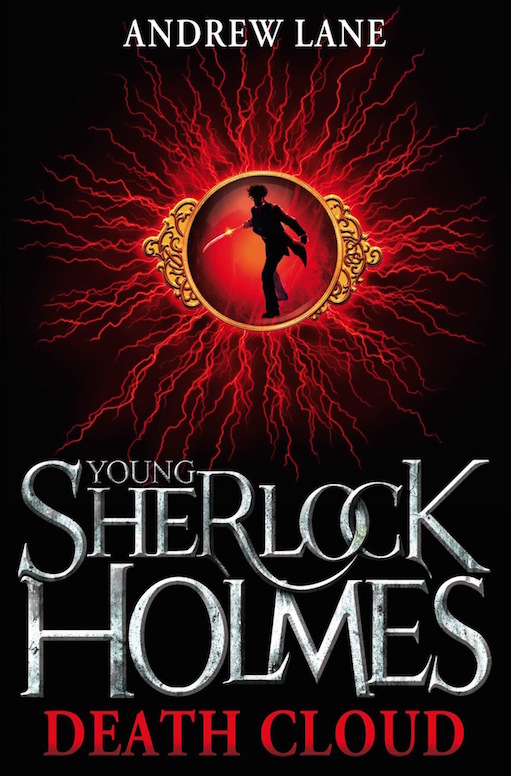 THE BEGINNING OF A LEGEND

When fourteen-year-old Sherlock Holmes discovers a pustule-covered body, it's the start of a new life. Sherlock's fearless mind and thirst for adventure lead him on a heart-stopping journey – from the quiet countryside to London's dockland underworld, through fire, kidnap and espionage, to the heart of a terrifying plot that holds Britain's future in its grasp.

Young Sherlock Holmes will need every ounce of courage, determination and strength to defeat an enemy of exquisitely evil intent. 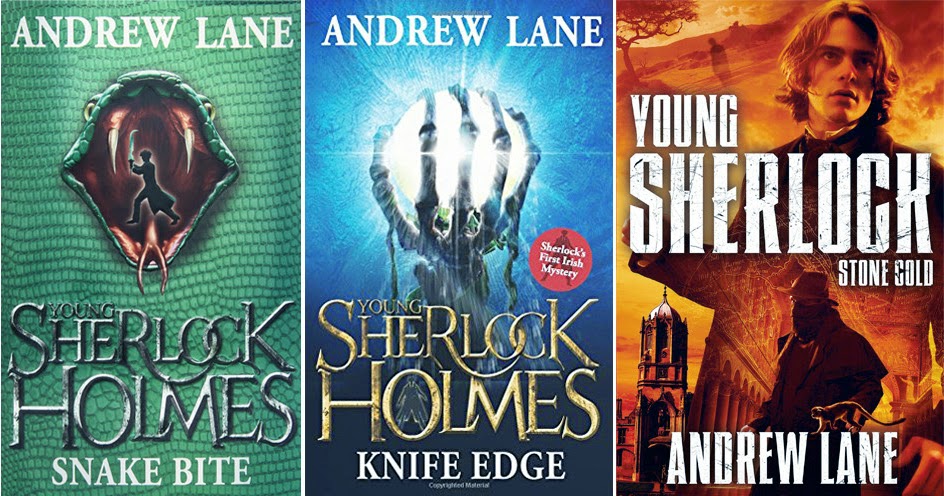 Novelization of the 1985 movie produced by Steven Spielberg and starring Nicholas Rowe as Holmes and Alan Cox as his friend and schoolmate John Watson. 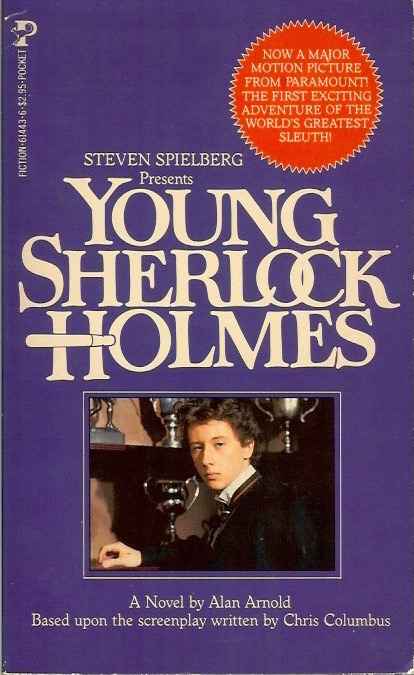 On his first murder case, a brilliant schoolboy is swept into a perilous adventure!

When his friend the eccentric professor mysteriously dies, sixteen year-old Holmes suspects of play. The eager detective drags his new friend Watson through London't dark alleys and over the rooftops, braving disaster––and even death––to capture a tricky, powerful foe!


It's a shame Pocket Books didn't use the actual movie poster art (below) for the cover of their novelization. Always loved it. 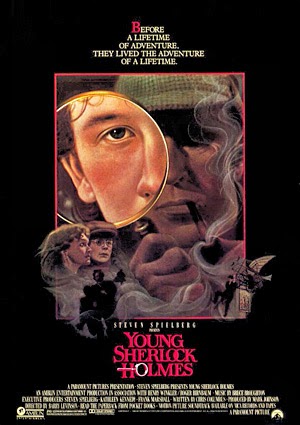 For a very good review of this novelization, check out Cult Film Club.

The New Adventures of Sherlock Holmes (1987)

For the Sherlock Holmes centennial in 1987, the Conan Doyle Estate authorized this collection of new short stories written by prominent authors, including Stephen King. Pictured here is the first hardcover edition. 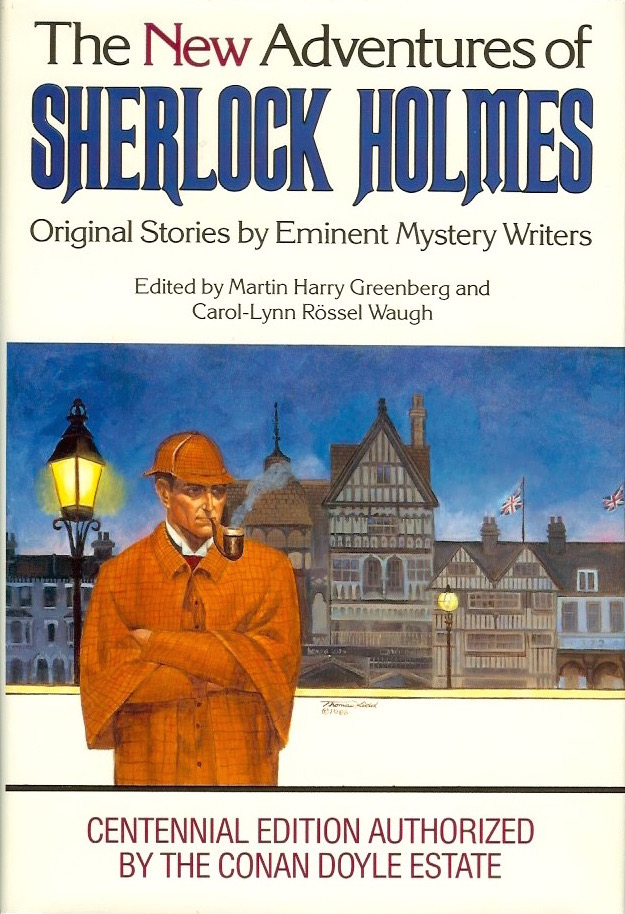 This year marks the 100th birthday of the first appearance in print of the most popular detective of all time. This volume of new Sherlock Holmes stories, written by some of the finest contemporary practitioners of the mystery story, is a centennial celebration of that event. This is the only official book authorized by the estate of Sir Arthur Conan Doyle.

The Infernal Machine by Jon Lellenberg
The Final Toast by John Lutz
The Phantom Chamber by Gary Alan Ruse
The Return of the Speckled Band by Edward D. Hoch
The Adventure of the Unique Holmes by Jon L. Breen
Sherlock Holmes and "The Woman" by Michael Harrison
The Shadows on the Lawn by Barry Jones
The Adventure of the Gowanus Abduction by Joyce Harrington
Dr. and Mrs. Watson at Home by Loren D. Estleman
The Two Footmen by Michael Gilbert
Sherlock Holmes and the Muffin by Dorothy B. Hughes
The Curious Computer by Peter Lovesey
The Adventure of the Persistent Marksman by Lillian de la Torre
The House that Jack Built by Edward Wellen
The Doctors Case by Stephen King
Afterword: Moriarty and the Real Underworld by John Gardner

The Adventures of Sherlock Holmes (1985)

I'm betraying the idea of this being a blog devoted solely to Sherlock Holmes pastiche and today bringing you a canonical entry. I do this because I love this Dell paperback from 1985 that tied-in with the Granada TV series starring the great Jeremy Brett (which aired in the U.S. on PBS). When I first saw this edition in my college bookstore, I had not yet seen the Granada series, and I remembering being a bit uncertain about this chap on the cover. Ha! 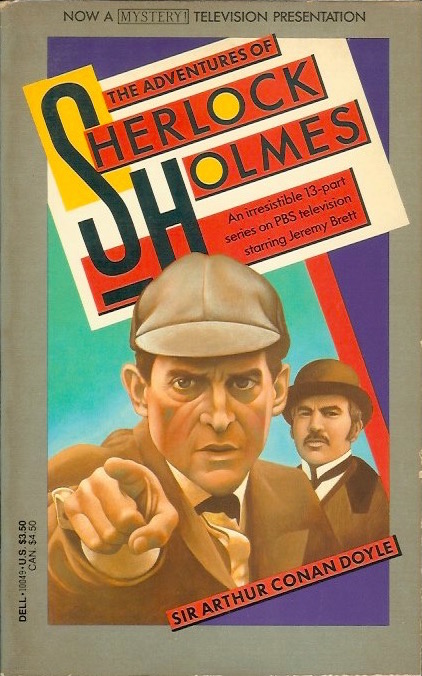 Here, in thirteen of his finest adventures––brought together for the first time in one paperback volume––Sherlock Holmes, the world's most famous detective, helps governesses in distress, clears young men wrongly accused of dire crimes, and catches criminals in cases hopelessly bungled by Inspector Lestrade of Scotland Yard. No sinister development can dissuade Holmes from pursuing each mystery to its brilliant conclusion––not even the malevolent cunning of Morality, his arch enemy, the Napoleon of Crime.

Just as the Granada TV series carries us back, with stunning authenticity, into the fascinating Victorian era, these stories carry us into a world of mystery without parallel, setting a standard still unsurpassed in a century of detective fiction. 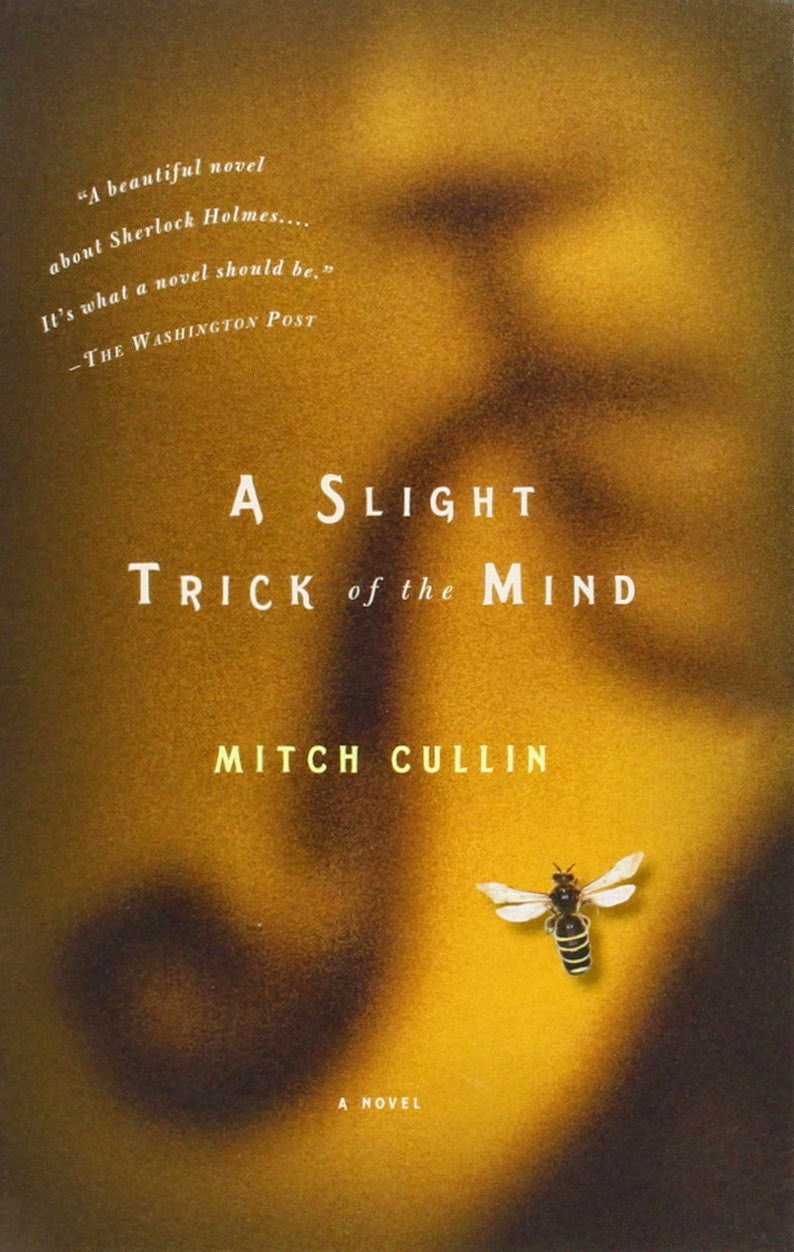 It is 1947, and the long-retired Sherlock Holmes, now 93, lives in a remote Sussex farmhouse with his housekeeper and her young son. He tends to his bees, writes in his journal, and grapples with the diminishing powers of his mind. But in the twilight of his life, as people continue to look to him for answers, Holmes revisits a case that may provide him with answers of his own to questions he didn’t even know he was asking–about life, about love, and about the limits of the mind’s ability to know. A novel of exceptional grace and literary sensitivity, A Slight Trick of the Mind is a brilliant imagining of our greatest fictional detective and a stunning inquiry into the mysteries of human connection. 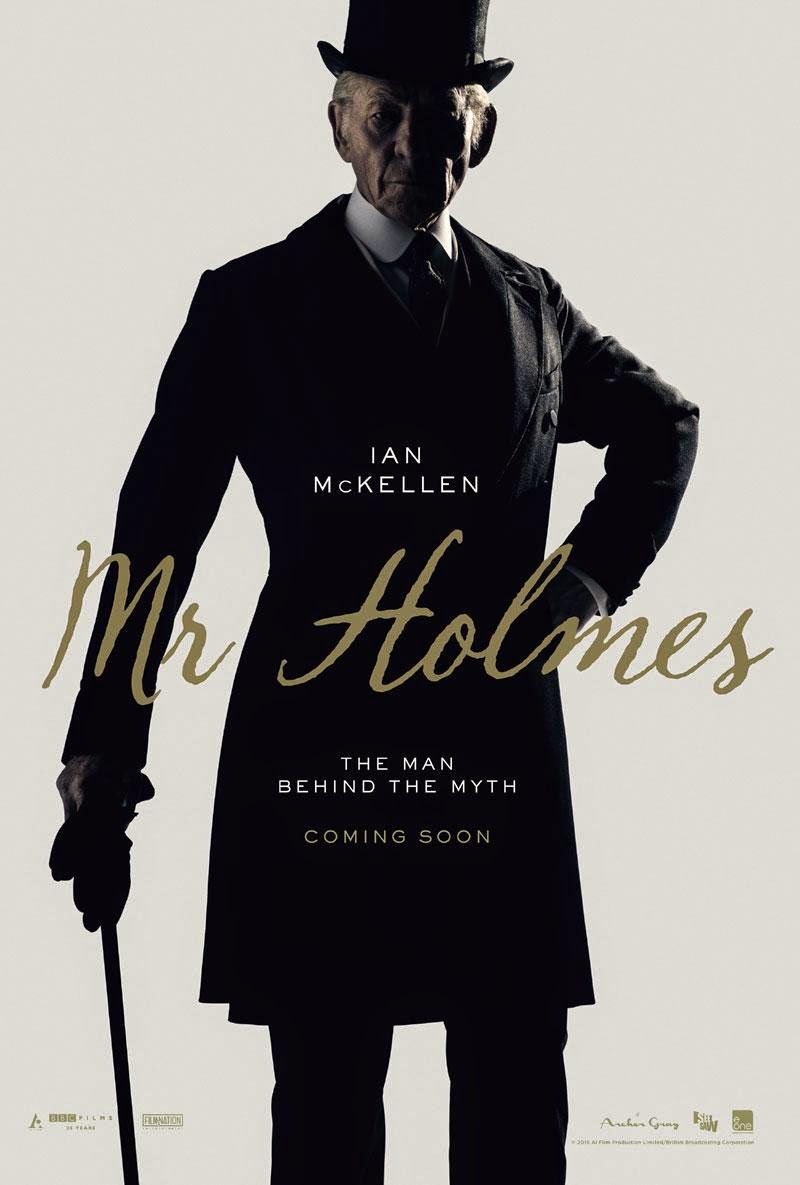