This is a UK paperback edition of John Gardner's second Moriarty novel. First published in 1975, this Star paperback is from 1984. Star also reprinted Gardner's first book, The Return of Moriarty, in 1983. 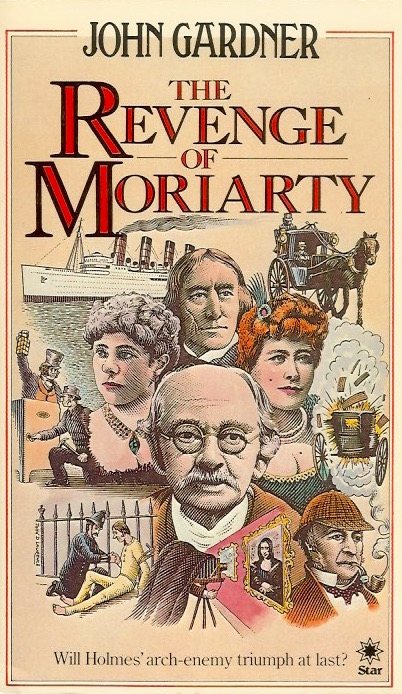 In the foggy autumn of 1886 a sobre and strangely reserved gentleman arrived in Liverpool off the American steamer. Moriarty was back...

The world has rejoiced in the dramatic return of Sherlock Holmes from the Reichenbach Falls – but who would mourn Moriarty? Who, indeed, ever gave his presumed death a second thought? Until the discovery some years ago of three bulky leather-bound volumes...

Now, using the hitherto unknown journals of the Napoleon of Crime himself, John Gardner tells the unfinished tale of Moriarty. The evil genius returns from exile and, within the mysterious depths of the Victorian underworld, works to bring his treacherous allies to heel. Superintendent Crow's suspicions are raised – but perhaps too late. For he too has been marked down for an ingenious and subtle revenge – revenge that will place Moriarty at the pinnacle of criminal power...

This is canon, not a continuation, but this cover is wild enough to be a pastiche! This is a 1949 Bantam paperback edition of Conan Doyle's Memories of Sherlock Holmes. Below is a description of the cover from the inside flap. 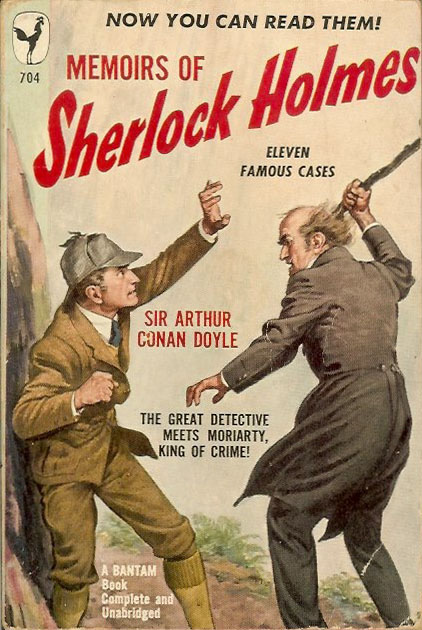 The Reichenback [sic] Falls! In a homely Alpine village, set down among lonely mountain pass, Sherlock Holmes at last met Moriarty, King of the Underworld.

There, in the spray that steamed up from the boiling pit below, where the swollen torrent crashed down on the cold black rocks, balanced in a battle over the edge of the giant abyss, Holmes and Moriarty held their last contest, a fight to the death for one–or both.