Holmes and Watson are on the trail of Jack The Ripper in 1893 New York. 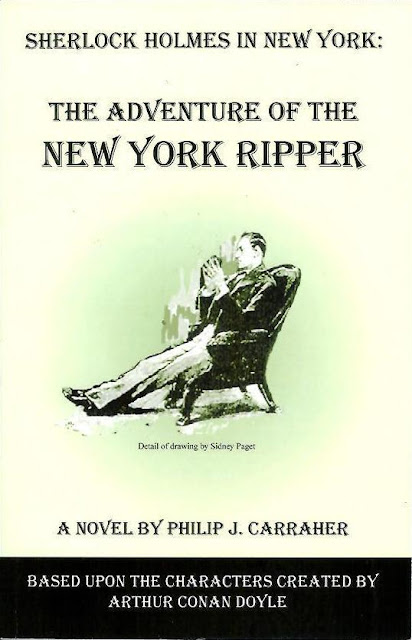 In The Adventure of The New York Ripper, we are, in addition to an outstanding mystery, presented with a history of the horrific Jack the Ripper crimes and with a brand-new theory regarding the commission of those terrible murders. A theory arising out of data of the crimes themselves and from the deductive powers of the one and only Sherlock Holmes.

Email ThisBlogThis!Share to TwitterShare to FacebookShare to Pinterest
Labels: Adventure of the New York Ripper, Crossover, Jack The Ripper

The Pandora Plague by Lee A. Matthias was first published as a mass market paperback from Leisure Books (below). Because of financial problems, the publisher only gave it a limited release. It later appeared as a trade paperback from Unicorn Press cut down by 8000 words. The author self-published a revised and expanded 3rd edition in 2009. 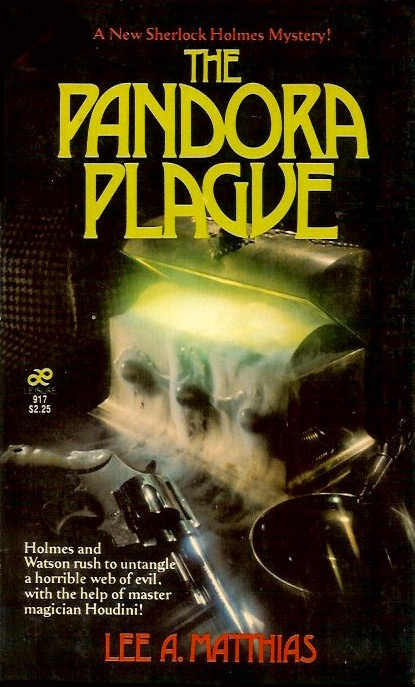 The theft of a seemingly innocuous pocket watch, and the appearance of a small and mystifying heavy box, began Sherlock Holmes' most challenging case. In an attempt to open the box, Holmes requested the presence of master magician Harry Houdini.

Soon, a series of puzzling events accelerated into a crisis of shocking importance, and Holmes, Houdini and Dr. Watson were drawn into the evil machinations of a hideously sinister plot.

Holmes' abilities were pushed beyond their limits, and a startling discovery by Madame Curie told the great detective that the world's fate rested in his hands!

The second book in a series by Leonard Goldberg featuring the daughter of Sherlock Holmes and Irene Adler. 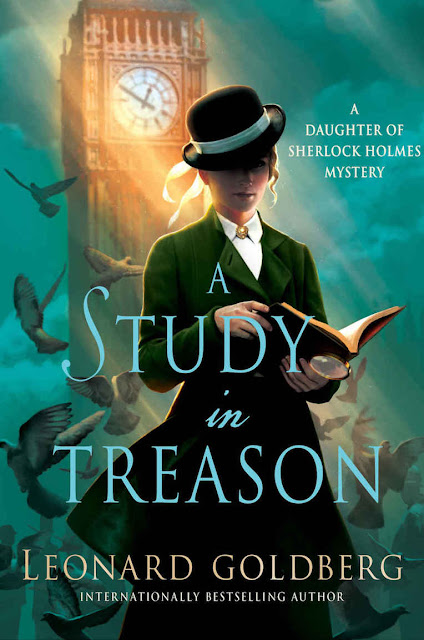 A seemingly impossible mystery tests the keen mind and forensic skills of Joanna Blalock, the daughter of Sherlock Holmes and the heir to his unique talent for deduction, from USA Today bestselling author Leonard Goldberg.

The following case has not previously been disclosed to the public due to the sensitive information on foreign affairs. All those involved were previously bound by the Official Secrets Act. With the passage of time and the onset of the Great War, these impediments have been removed and the story can now be safely told.

When an executed original of a secret treaty between England and France, known as the French Treaty, is stolen from the country estate of Lord Halifax, Scotland Yard asks Joanna, Dr. John Watson, Jr., and Dr. John Watson, Sr. to use their detective skills to participate in the hunt for the missing treaty. As the government becomes more restless to find the missing document and traditional investigative means fail to turn up the culprit, Joanna is forced to devise a clever plan to trap the thief and recover the missing treaty.

Told from the point of view of Dr. John Watson, Jr. in a style similar to the original Sherlock Holmes stories, A Study in Treason is based partly on facts in our world and partly on the facts left to us by Sir Arthur Conan Doyle.

This cunning locked room mystery is sure to be enjoyed by fans of Sherlock Holmes.