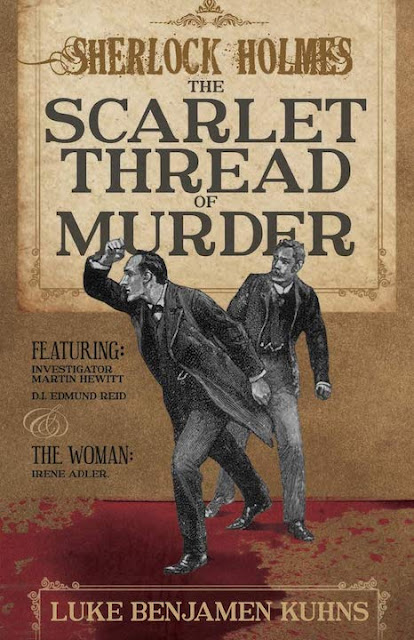 The Scarlet Thread of Murder: Three seemingly separate crimes, three detectives. A mysterious stalker is on the loose in London known only as the Goblin Man and his sights are set on a wealthy businessman, David Daniels. A horrific explosion rips through Whitechapel Underground Station and the prime suspect is a Jewish anarchist. And a Mrs Clara Edwards is searching for her missing lover, Philias Jackson. What connects these three? It's a dangerous and complex game that connects Sherlock Holmes, Investigator Martin Hewitt, and former Ripper investigator and head of H Division Edmund Reid.

A Scandal in America: In 1888 Mr Sherlock Holmes was beat by Irene Adler aka the Woman. After her marriage to Godfrey Norton she left London. Two years later her husband is found dead in his New York office, apparently having committed suicide. Irene Adler believes it to be staged, unable to accept Norton capable of such an end. There is one person, if any, who she can turned to: Sherlock Holmes. Holmes and Watson are headed to America where they must dive into the mysterious life of Godfrey Norton to learn how and why he died. No one is ready for what they learn.

Email ThisBlogThis!Share to TwitterShare to FacebookShare to Pinterest
Labels: The Scarlet Thread of Murder

A collection of Sherlockian parodies "from unlikely sources" collected by Robert C.S. Adey. 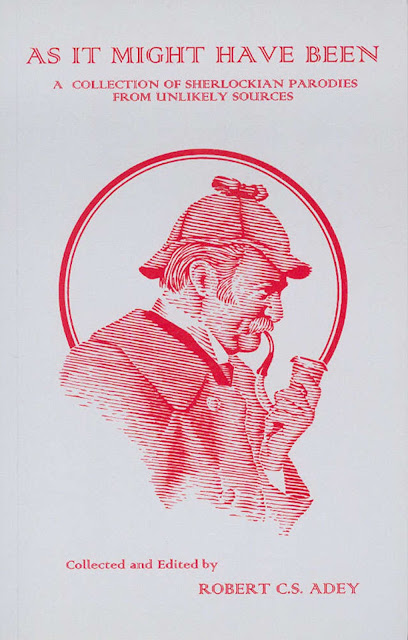 Ellery Queen once described the difference between pastiche and parody: 'A pastiche is a serious and sincere imitation in the exact manner of the original author. But writers of parodies, which are humorous or satirical take-offs, have no such reverent scruples. They usually strive for the weirdest possible distortions, and many ingenious travesties have been conceived.'

AS IT MIGHT HAVE BEEN is all about those distortions and ingenious travesties: the collection brings together some thirty-eight examples, most of which have not seen the light of day since their first publication in obscure magazines.

The reader will encounter Herlock Sholmes, Sheer Luck, Padlock Jones, Hemlock Coombs, and many others, including a delightful parody of a Conan Doyle ROUND THE RED LAMP story. But all of these pieces were written with one character in mind—the never to be forgotten Sherlock Holmes. As such, they may be regarded as a tribute to the creator and the created.

Join us then, as Sherlock Holmes (or whichever character he appears to be at the time) investigates 'The Great Security Bank Mystery', 'The Reigate Road Murder', 'The Marischal Manor Mystery', 'The Omnibus Murder', and a host of other unusual cases. This splendid collection has been gathered for our pleasure by Robert Adey, whose leisure hours, as will be apparent, were spent collecting and trawling through long-forgotten magazines and periodicals.


Title: As It Might Have Been
Author: Robert C.S. Adey
Year: 1998
Publisher: Calabash Press
Purchase: Amazon.com | Amazon.co.uk
Posted by John Cox at 12:30 PM No comments: