Who Done Houdini? by Raymond John finds Sherlock Holmes investigating the death of Harry Houdini and defending Sir Arthur Conan Doyle who is a suspect in his murder! (Click to read: The real story of Houdini & Doyle.) 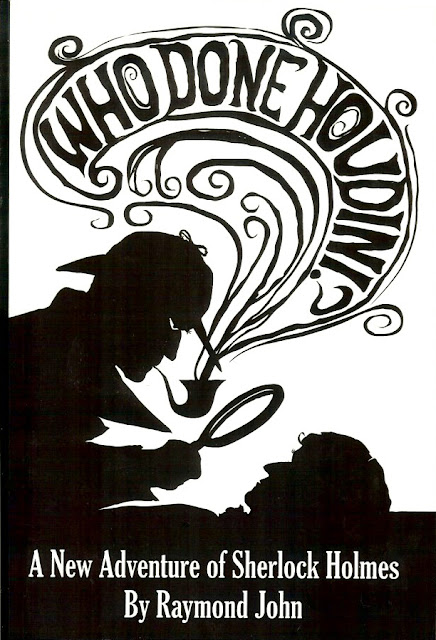 Detroit Free Press reporter Timothy Wiggins learns of Harry Houdini’s death on Halloween 1926 with more than casual interest. He had been at the great magician’s final performance the night before. Wiggins had grown up as a sort of magician himself on the streets of London, stealing to survive. But then he met the real-life Sherlock Holmes, who made him his chief Bay Street Irregular. Now, years later, Holmes notifies Wiggins he is in the U.S. at the request of Sir Arthur Conan Doyle, who is being investigated as a possible murder suspect in Houdini’s death.

What follows is a mad dash to New York and Boston with a deranged Spiritualist medium on the tail of Holmes and his team of investigators: Wiggins, his feminist wife, and Rose Mackenburg, Houdini’s top investigator into phony Spiritualism, which was rampant at the time. In Boston, Sir Arthur introduces the team to Margie, the most highly regarded Spiritualist of the day. Her séance and the bizarre form of treasure hunt that follows leads to a stunning climax that will change everyone’s perception of Holmes’s character.