Sherlock Holmes and The Bizarre Alibi (2004)

Frank Thomas was the author of some 10 Holmes novels, starting with Sherlock Holmes and the Golden Bird in 1979. His later books were self-published, including this 2004 release. 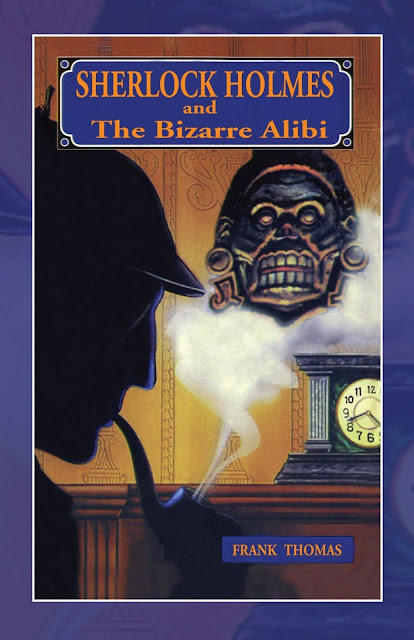 With only the light of Slim's bull's-eye, it was rough going and soon my hands were bleeding and my legs protesting . But an untapped source of strength came to my aid. Here I was struggling towards unknown dangers, but i was living, i was part of an adventure. I was in the midst of an experience that my sedate fellow doctors in their well-appointed offices on Harley could only find in flights of fantasy. I was actually part of the stuff tha dreams are made of and, somewhat to my suprise, i found it exhilarating. Because of my association with the greatest detective the world has ever known, I was part of an heroic saga, a small part I will admit. Not that I felt heroic. I felt like a middle-aged commonplace man involved in exploits he was ill-suited for. But I was here with Holmes and I would not have had it any other way.