Released in 2009, Gaslight Grotesque: Nightmare Tales of Sherlock Holmes offered a new collection of Holmes stories, each with a horror twist. 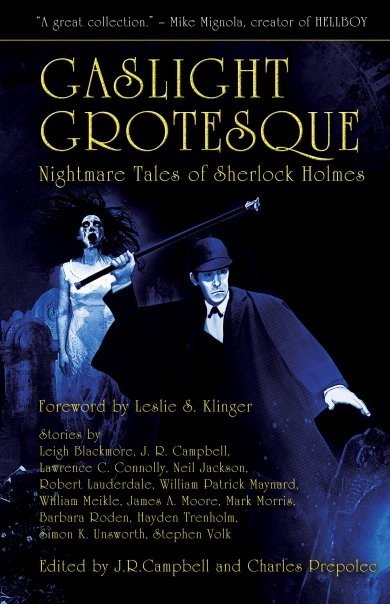 THE MONSTERS ARE DUE ON BAKER STREET!

Between the shadowy realms of fear and the unforgiving glare of science lies a battleground of unspeakable horror. In vile alleyways with blood-slick cobblestones, impenetrable fog, and the wan glow of gaslight, lurk the inhuman denizens of nightmare.

Faced with his worst fears, Sherlock Holmes has his faith in the science of observation and deduction shaken to the core in 13 all-new tales of terror from today's modern masters of the macabre!


Hounded by Stephen Volk
The Death Lantern by Lawrence C. Connoll
The Quality of Mercy by William Meikle
Emily's Kiss by James A. Moore
The Tragic Case of the Child Prodigy by William Patrick Maynard
The Last Windigo by Hayden Trenholm
Celeste by Neil Jackson
The Best Laid Plans by Robert Lauderdale
Exalted are the Forces of Darkness by Leigh Blackmore
The Affair of the Heart by Mark Morris
The Hand-Delivered Letter by Simon Kurt Unsworth
Of the Origin of the Hound of the Baskervilles by Barbara Roden
Mr. Other's Children by J. R. Campbell