An Improbable Truth: The Paranormal Adventures of Sherlock Holmes (2015)

A collection of paranormal Holmes stories edited by A.C. Thompson. 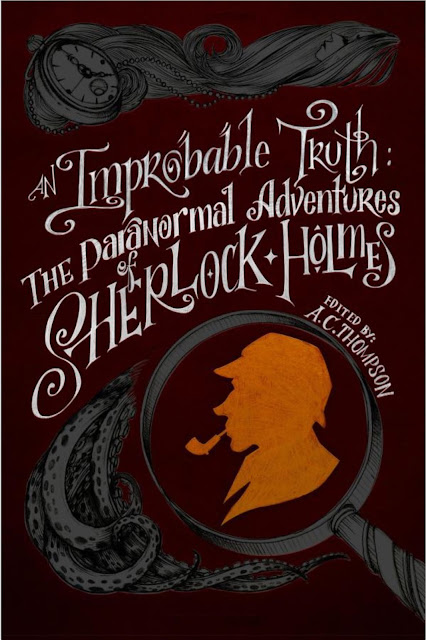 “When you have eliminated all which is impossible, then whatever remains, however improbable, must be the truth.”

Sherlock Holmes is one of the most recognizable characters in Western literature. Conan Doyle’s inimitable detective has been the subject of literally thousands of books, movies, television shows, plays and even songs. With the rise of the BBC series and the release of most copyrights, the beloved character has found a new life among modern audiences. In An Improbable Truth: The Paranormal Adventures of Sherlock Holmes, 14 authors of horror and mystery have come together to create a unique anthology that sets Holmes on some of his most terrifying adventures. A pair of sisters willing to sacrifice young girls to an ancient demon for a taste of success, a sinister device that can manipulate time itself, and a madman that can raise corpses from the dead are just a few among the grisly tales that can be found within these pages. Curl up with a warm cuppa and leave all the lights on. This is not your grandfather’s Sherlock Holmes.

The Fairy Pool by Lucy Blue
Sherlock Holmes & the Hungry Ghost by Katie Magnusson
The Diamond Carter Ghost by Matthew Wilson
The Case of the Haunted Branch Line by Tally Johnson
The Arendall Horror by Thomas Olbert
World's Collide by Sh. Roddey
Time's Running Out, Watson by Adrian Cross
A Voice in the Blood by Dan Shaurette
The Hunt of the Red Boar by Thomas Fortenberry
The Canaries of Clee Hill Mines by Robert Perret
The Chase by Melissa McArthur
The Adventure of the Missing Trophy by Mark W. Coulter
The Case of the Rising Dead by Trenton Mabey
The Adventure of the Slow Death by Harding McFadden