Sherlock Holmes: Adventures in the Realms of Steampunk, Mechanical Men and Otherworldly Endeavours (2019)

The second volume of a collection of steampunk adventures of Sherlock Holmes complied and published by Derrick Belanger. 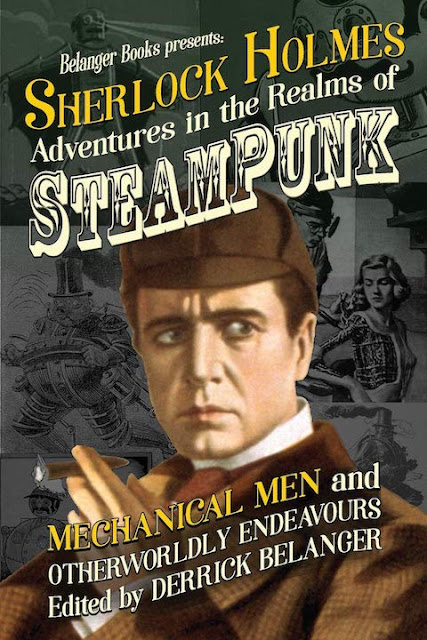 The WORLD'S GREATEST DETECTIVE
in the Retro Futuristic Realms of
STEAMPUNK!

Imagine a slight change to our historical timeline where the Industrial Revolution heated up much quicker than expected. Technological marvels such as airships, trains, battleships, and submarines came into being much earlier. They were followed by steam-powered wonders such as mechanical men, flying ships, and even crafts capable of reaching the deepest fathoms of the sea or traveling to distant celestial orbs.

Mechanical Men and Otherworldly Endeavours - Volume two of the anthology features stories with a focus on robotic creatures and otherworldly adventures. See Holmes team up with intelligent animals from an alternate Earth, switch bodies with Dr. Watson, and travel to another dimension:

Email ThisBlogThis!Share to TwitterShare to FacebookShare to Pinterest
Labels: Adventures in the Realms of Steampunk, Science Fiction, Short Stories