Sherlockian Lyndsay Faye returns with a collection of Holmes stories told from various points of view.  Faye was recently interviewed on the excellent However Improbable podcast. 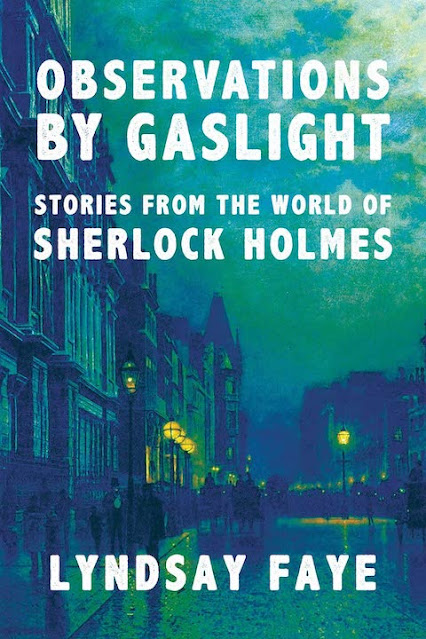 A new collection of Sherlockian tales that shows the Great Detective and his partner, Watson, as their acquaintances saw them

Lyndsay Faye―international bestseller, translated into fifteen languages, and a two-time Edgar Award nominee―first appeared on the literary scene with Dust and Shadow, her now-classic novel pitting Sherlock Holmes against Jack the Ripper, and later produced The Whole Art of Detection, her widely acclaimed collection of traditional Watsonian tales. Now Faye is back with Observations by Gaslight, a thrilling volume of both new and previously published short stories and novellas narrated by those who knew the Great Detective.

Beloved adventuress Irene Adler teams up with her former adversary in a near-deadly inquiry into a room full of eerily stopped grandfather clocks. Learn of the case that cemented the lasting friendship between Holmes and Inspector Lestrade, and of the tragic crime which haunted the Yarder into joining the police force. And witness Stanley Hopkins’ first meeting with the remote logician he idolizes, who will one day become his devoted mentor.

From familiar faces like landlady Mrs. Hudson to minor characters like Lomax the sub-librarian, Observations by Gaslight―entirely epistolary, told through diaries, telegrams, and even grocery lists―paints a masterful portrait of Sherlock Holmes and Dr. Watson as you have never seen them before.