The Case of the Baker Street Irregular (1981)

Robert Newman's tale of a budding "Baker Street Irregular" kicked off a series of books featuring the exploits of young Andrew and Sara. Only this first book featured Holmes. First published in 1978, this is the 1981 Bantam paperback edition. 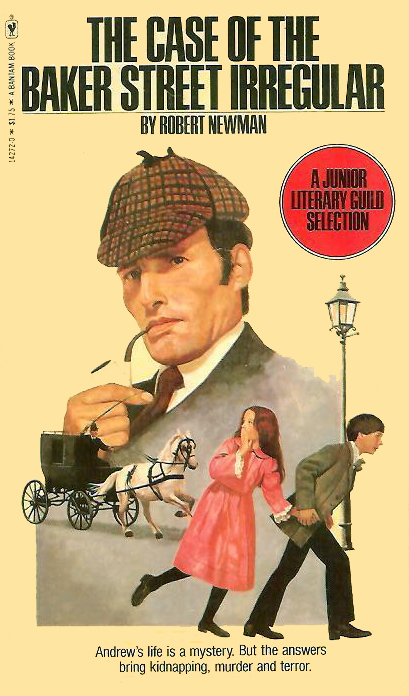 A mysterious, broken-nosed cabby, a beautiful actress, and a villainous art heist have one thing in common—but the only one man who knows what it is has methods that are a little, shall we say . . . irregular

Late Victorian London: home to gas streetlights, bands of ragged urchins, and now, young Andrew Craigie, who recently arrived from a tiny Cornwall village with his stern guardian, Mr. Dennison. At first the city feels dark and unwelcoming, but just around the corner is bustling Baker Street, where Andrew meets his first friend, Sara. Before long, London becomes downright interesting.

But things get a little too exciting one night when Mr. Dennison doesn’t come home, and suddenly Andrew is on his own. Whom can he turn to in a strange city? Frantic, he goes to the tall, pipe-smoking, hat-wearing man at 221B, a man who Sara says is a famous detective—a man named Mr. Holmes.

Email ThisBlogThis!Share to TwitterShare to FacebookShare to Pinterest
Labels: Case of the Baker Street Irregular