The Adventure of the Deadly Illusion (2013)

Holmes investigates a magical murder mystery with the help of Alice in Wonderland author Lewis Carroll. 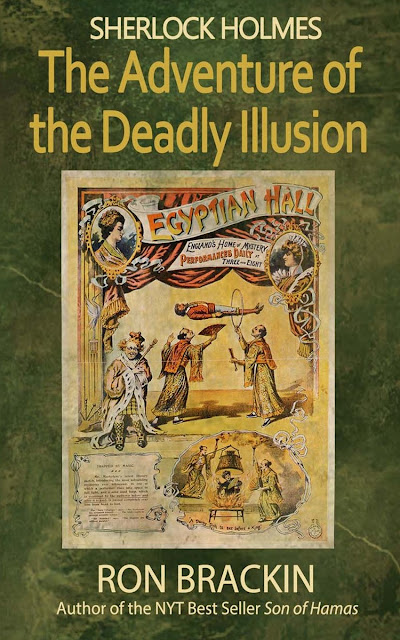 Before 221b Baker Street, young Sherlock Holmes lodged in his rooms at Christ Church, Oxford. Before Dr. John H. Watson, Holmes was accompanied in his adventures by his college don, Rev. Charles Dodgson, aka Lewis Carroll (yes, Alice’s Lewis Carroll). And before the tin dispatch box with its trove of unpublished adventures, there was discovered, in an old leather document case, a most unusual manuscript, published now for the first time.

Be prepared to enter the dark underworld of Victorian London - Seven Dials, Billingsgate, and the waterfront! A world peopled with murderers and magicians, royalty and rogues!

A series of jewel thefts suddenly turns to murder. And Holmes and Dodgson are led from an old English manor through a magician's workshop beneath the mysterious Egyptian Hall to one of her majesty's most closely guarded secrets

"Sherlock Holmes and The Adventure of the Deadly Illusion" is Victorian mystery at its tastiest.

Email ThisBlogThis!Share to TwitterShare to FacebookShare to Pinterest
Labels: Adventure of the Deadly Illusion, Crossover