The New Adventures of Sherlock Holmes (1999)

A 1999 reprint of the 1987 centennial collection with three new stories added. 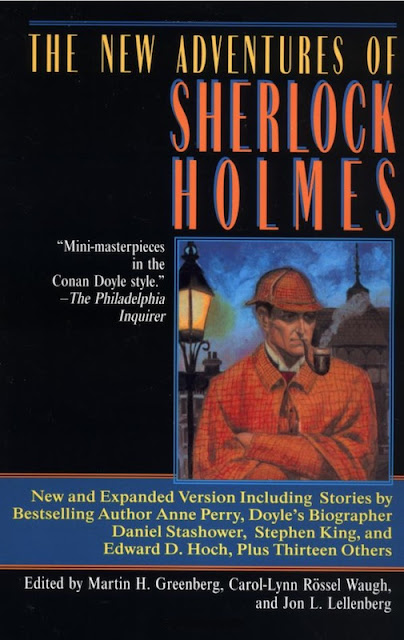 Bestselling author Anne Perry and Conan Doyle's most recent biographer, Daniel Stashower, among others, contribute new stories that expand this tribute to Conan Doyle's immortal creation. Mystery editors Martin Greenberg and Carol-Lynn Rossel Waugh specially commissioned original works by Stephen King, Michael Gilbert, John Lutz, Edward D. Hoch, Dorothy B. Hughes, Peter Lovesey, Lillian de la Torre, John Gardner, and others for the first edition. With over 100,000 copies sold since its publication for the centennial of the first Holmes story, "The Speckled Band," in 1987, The New Adventures of Sherlock Holmes has ranked in popularity only after the first Conan Doyle stories.

The Infernal Machine by Jon Lellenberg
The Final Toast by John Lutz
The Phantom Chamber by Gary Alan Ruse
The Return of the Speckled Band by Edward D. Hoch
The Adventure of the Unique Holmes by Jon L. Breen
Sherlock Holmes and "The Woman" by Michael Harrison
The Shadows on the Lawn by Barry Jones
The Adventure of the Gowanus Abduction by Joyce Harrington
Dr. and Mrs. Watson at Home by Loren D. Estleman
The Two Footmen by Michael Gilbert
Sherlock Holmes and the Muffin by Dorothy B. Hughes
The Curious Computer by Peter Lovesey
The Adventure of the Persistent Marksman by Lillian de la Torre
The House that Jack Built by Edward Wellen
The Doctors Case by Stephen King
(NEW) The Second Treaty by Daniel Stashower
(NEW) The Adventure of the Venomous Lizard by Bill Cider
(NEW) Hostage to Fortune by Anne Perry
Afterword: Moriarty and the Real Underworld by John Gardner