Sherlock Holmes and the Case of the Undead Client (2019)

A new final case of Sherlock Holmes by M. J. Downing. Sounds like Jack the Ripper is also in the mix. 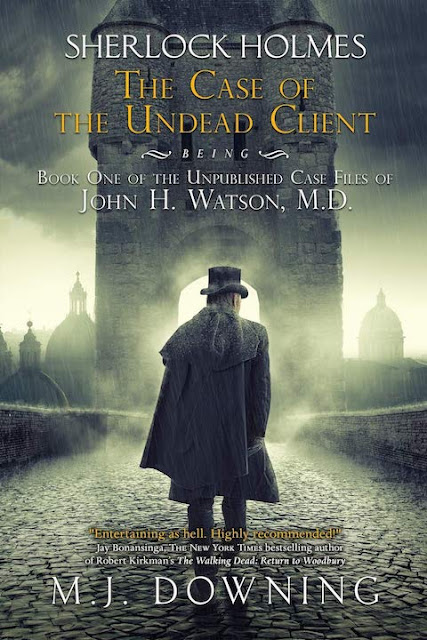 Sherlock Holmes' devoted friend Dr John Watson takes the lead in a case so bizarre that it could only be revealed after Holmes’ death.

Sherlock Holmes has only been deceased a month when Dr. John Watson, still grieving, recounts his final case with Holmes. A terrifying mystery, it sends Watson and Holmes into the dark reaches of London’s back alleys – and the human soul.

It begins when Anne Prescott, a lovely Scottish nurse, begs Sherlock Holmes and Watson to help her find her fiancé and her sister, who have gone missing in the teeming streets of London. Immediately, Watson feels an attraction to her that shocks him. Newly married to Mary, and deeply in love with her, he struggles to put Anne out of his mind.

As Watson and Holmes dig into the slums and sewers of London looking for Anne’s fiancé and sister, they uncover a deadly web of bloody murders, horrific medical experiments, and even voodoo ritual that threatens not only London, but the entire British empire, and beyond.

Watson must call on his unique combination of expertise in the medical sciences, as well as his military training to stop this killer before London – and Anne -- are lost to the killer’s bloody plan. But time is short and the mystery ever more complex. How can he manage his feelings for Anne? What about his loyalty to Mary? He can’t have both.