The Meeting of the Minds: The Cases of Sherlock Holmes & Solar Pons I (2021) 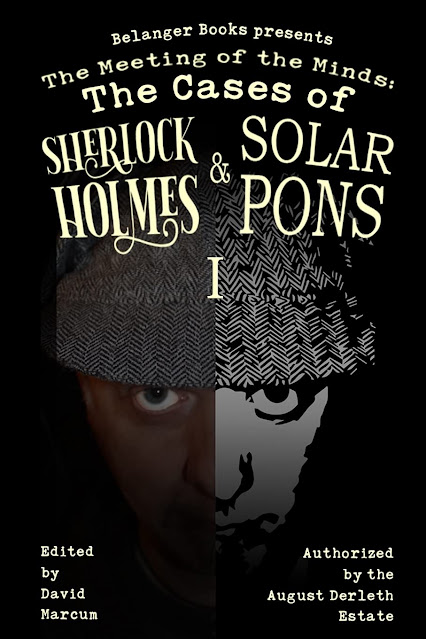 The world knows of Sherlock Holmes. For those who haven’t yet been lucky enough to yet meet Mr. Pons, one should know that he is a Great Detective in the Holmesian Mold: He models himself after Holmes, wearing the expected deerstalker and Inverness. He investigates using ratiocination, observation, and deduction. His adventures, set in the 1920’s and 1930’s, are transcribed by his friend, Dr. Parker. He lives in London, working closely with Scotland Yard, and he helps to fill the vacuum left when Sherlock Holmes retired to Sussex.

Throughout the Pontine Canon, there are references to Sherlock Holmes. For long decades, Pons fans and scholars have speculated on the connection between the two. Now, after all this time – nearly one-hundred years since the last Canonical Holmes story was published and Derleth recorded the first Pons tale – Belanger Books proudly presents the stories that provide answers – The Meeting of the Minds . . . .