This is a 1987 UK paperback edition of Robert Lee Hall's intriguing novel, Exit Sherlock Holmes. I always thought this one would have made a good movie. 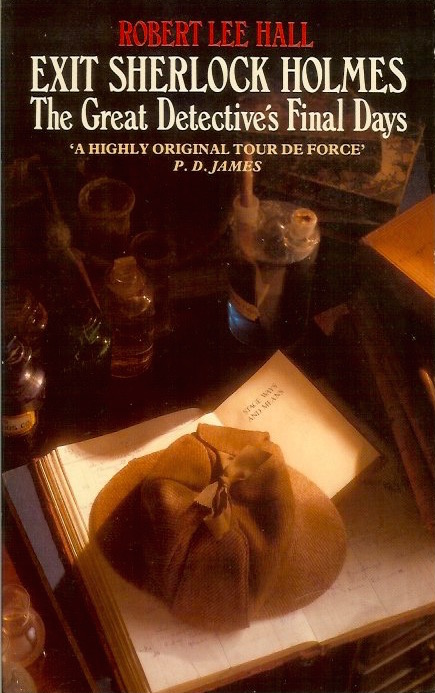 THE ASTOUNDING SOLUTION TO THE ENIGMA OF SHERLOCK HOLMES

October 1903. Moriarty is back in London–he too survived the Reichenbach Falls. Holmes goes to ground, leaving Watson like so much bait to draw the quarry. But the subsequent astonishing revelation and confrontation at 221B Baker Street is only the first in a shattering series of blows to be dealt Watson's (and our) view of Holmes. Until now we have known only the skimpiest details of his early life–and then only what he himself, a fiercely secretive man, chose to reveal. Where did he acquire his many different skills? Why did he tell Watson so little about his brother Mycroft? And what was the true relationship between Holmes and his arch foe Moriarty? Mysteries and enigmas rise to envelop Watson in his quest for the truth like the yellow fogs of Victorian London. Can he ever pin down the true identities of Holmes and Moriarty–and the true meaning of their lifelong duel?