A collection of original Holmes stories that mix the great sleuth with the macabre world of H.P. Lovecraft. 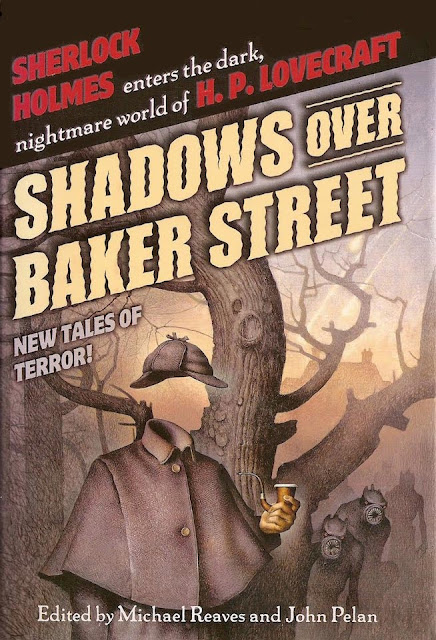 Arthur Conan Doyle’s Sherlock Holmes is among the most famous literary figures of all time. For more than a hundred years, his adventures have stood as imperishable monuments to the ability of human reason to penetrate every mystery, solve every puzzle, and punish every crime.

For nearly as long, the macabre tales of H. P. Lovecraft have haunted readers with their nightmarish glimpses into realms of cosmic chaos and undying evil. But what would happen if Conan Doyle’s peerless detective and his allies were to find themselves faced with mysteries whose solutions lay not only beyond the grasp of logic, but of sanity itself.

In this collection of all-new, all-original tales, twenty of today’s most cutting edge writers provide their answers to that burning question.

A Study in Emerald by Neil Gaiman
Tiger! Tiger! by Elizabeth Bear
The Case of the Wavy Black Dagger by Steve Perry
A Case of Royal Blood by Steven-Elliot Altman
The Weeping Mask by James Lowdoer
Art in the Blood by Brian Stebleford
The Curious Case iof Miss Violet Stone by Poppy Z. Brite and David Ferfuson
The Adventure of the Antiquarian's Niece by Barbara Hambly
The Mystery of the Worm by John Pelan
The Mystery of the Hanged Man's Puzzle by Paul Finch
The Horror of the Man Faces by Tim Lebbon
The Adventure of the Arab's Manuscript by Michael Reaves
The Drowned Geologist by Catlin R. Kiernan
A Case of Insomnia by John P. Vourlis
The Adventure of the Voorish Sign by Ricahrd A. Lupoff
The Adventure of the Exham Priory by F. Gwynplaine MacIntyre
Death Did Not Become Him by David Niall Wilson and Patricia Lee Macomber
Nightmare in Wax by Simon Clark