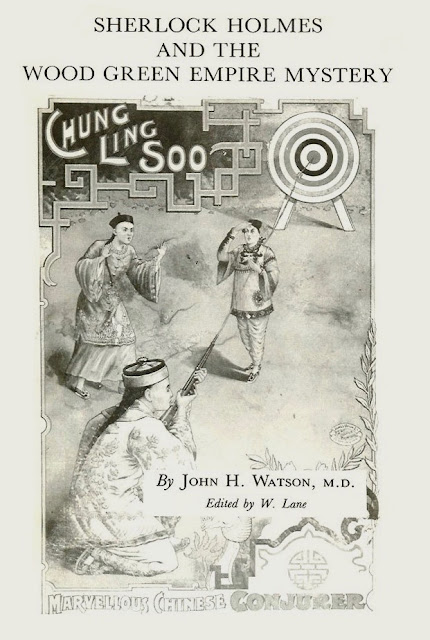 Was it murder, suicide (the most cold blooded ever), or an accident? The Wood Green coroner brought in a verdict of "death by misadventure." But Sherlock Holmes (lured from his bee-keeping retirement), knew better. Yet for certain reasons he did not divulge his findings, save to his faithful "Boswell," Doctor John Watson.

In March 1918, a Chinese conjurer, Chung Ling Soo, advertised that he would catch bullets in his teeth on the stage of London's Wood Green Empire. Despite having performed the feat a hundred times, he was fatally wounded in front of several hundred people, dying within hours.

Far from being an Oriental, he was discovered to be an American: William Ellsworth Robinson, who had filled press and public alike for all but twenty years with his Mongolian disguise. His "wife," the tiny "Suee Seen," also proved to be an American, and there had been domestic problems.

The story presents a practical solution to a bizarre real-life mystery that in more than sixty years has never been resolved.