Sherlock Holmes and the Railway Maniac (2001)

A Holmes pastiche by Barrie Roberts originally published in 1994. This is the hard to find 2001 UK paperback edition. 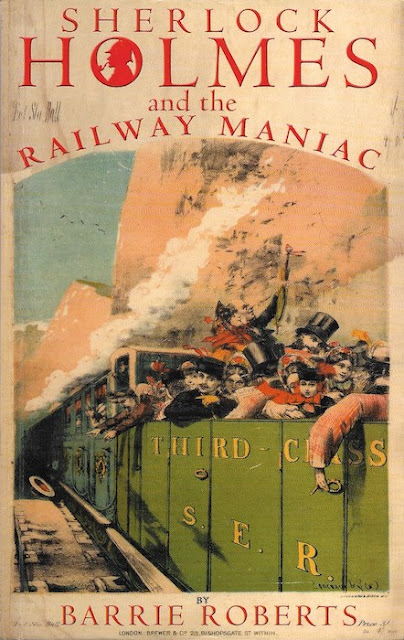 "Nothing would tempt me back to my old career on any but the most temporary basis."

Now in his third year of retirement, the celebrated master detective Sherlock Holmes announces his firm resolve to stay well out of affairs of others to his old friend and colleague Dr. John Watson. But this emphatic sentiment is to be short lived.

At the behest of his enigmatic brother, Holmes is persuaded to investigate two unexplained, catastrophic train derailments which have caused the death of more than forty people. Why would a criminal wreck an express train?

As the clues accumulate  –  strange astronomer, the German Intelligence Service, a Russian yacht in the port of Aberdeen – the most homicidal lunatic in Britain remains at large.  Something was afoot in Scotland to draw the King and Mycroft from their lairs ... a meeting with the emissary of the Czar, or something more?

Can even the strenuous efforts of Sherlock Holmes avert an international calamity and bring to justice this evil assassin? All is revealed in an intriguing tale that even the late Conan Doyle would have been proud of

Email ThisBlogThis!Share to TwitterShare to FacebookShare to Pinterest
Labels: Sherlock Holmes and the Railway Maniac